Transition out of the small scale between Steps 65 to 69 and into the human scale. Stop at Notation 66 to consider the proton and fermion. 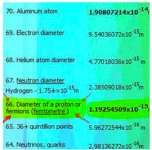 Step 66, a range that includes the diameter of the proton and fermion.

This is one of the most pivotal steps on the chart. It is the first notation on this chart where objects can be measured. These objects have a presence within space and time.

As we go smaller, perhaps even the very nature of space and time changes.  The physics community knows there are possible measurements down to the Planck Length but it seems most of our scientists consider these measurements — anything smaller than elementary particles — to be beyond useful application.

Key Idea: In 1962, Thomas Kuhn (Harvard) published his book, The Structure of Scientific Revolutions. He writes extensively about paradigm shifts, radical jumps in the way we think and live. The World Wide Web was such a shift. The very simple structure of the Big Board-little universe and its derivative, The Universe Table, just might engender such a shift.

Notes about Look-and-feel and Navigation:   Usually if you click on the last sentence in each description you will go to the next page.

Much of the work in these notations is done in Switzerland at the most prestigious research center, CERN (aka “Center for European Research – Nuclear“). They have the largest particle accelerator in the world called the Atlas. Their work has been in the news for confirming what some rather metaphorically call the God Particle. Yet, with billions of dollars in research funding, they struggle to make progress. A paradigm shift might help and the Big Board-little universe and its Universe Table are very different ways of looking at our universe. Some CERN folks say that anything smaller than what they are measuring is silliness. We therefore propose that it is potentially good to be silly.

60+ notations.  Perhaps these are the intellectual building blocks for the elementary particles and everything beyond the atomic level. We also assume a point-free geometry based on over a quintillion vertices.  Also, in this range, because we are approaching the simplicity and apparent singularity of the Planck Length, all the geometries must be shared with everything else.